If you have purchased the XC Extension, then the following new instruments are available for you, and can be placed anywhere on the fly-screens. In addition to the new instruments, the XC Package also determines when you are thermaling, and your general flight direction outside of thermals. This general flight direction is indicated as a cyan coloured line on the normal map instrument. The line also shows where you will likely hit the ground with the current glide ratio in that direction.

The general flight direction is also used for the side view, showing the landscape along that direction. That way, you can still see what lies ahead even while thermaling. 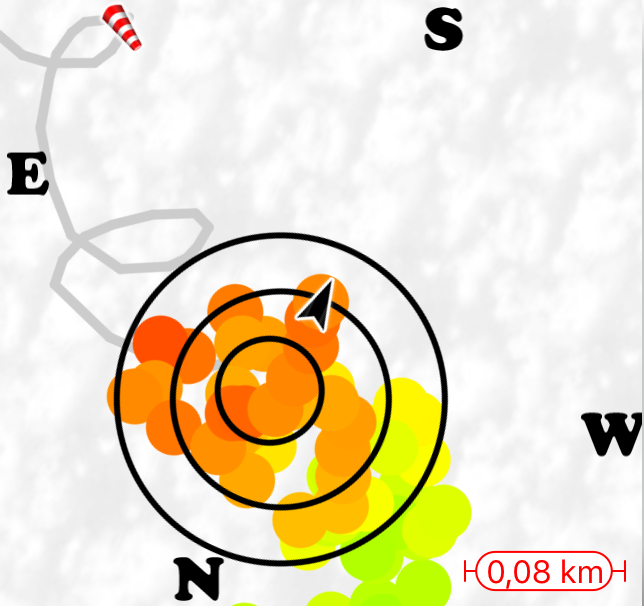 A visual image is shown of the current thermal, in vivid colours. The weak parts of the thermal are shown in green colour, stronger parts in yellow, and the strongest core is shown in red (> 4 m/s). The circles show the estimated centre of the thermal. All indicators are shown where they are likely to be at your current altitude. That is, the effect of the wind on the thermal is already taken into account.

When enabled in the Settings, the app will switch automatically to the page with the thermal centring tool when entering the thermal, and back to the previous page when exiting.

The instrument shows the straight-line distance from the takeoff location, and the direction to it.

A side view shows the landscape ahead along your general flight direction. Your expected glide line indicates where you will likely hit the ground. With the Airspaces Extension, the airspaces that you will encounter along that direction are also shown.

The Triangle instruments are useful when you are trying to fly a FAI triangle. The Current Triangle instrument shows the direction you need to fly to close the triangle, and how large it will be if you do so. The arrow will turn green if you have closed the triangle according to the XContest rules, that is, if the smallest gap between start and finish is less than 20% of the triangle size. The size indicated by the instrument assumes that you will be able to reduce that gap to zero.

The Possible Triangle instrument gives a suggestion of a triangle that you could reasonable try to achieve given your flight track so far. It shows how large that triangle can potentially become, and which direction you roughly need to fly to achieve that. The potential triangle is continously recomputed, so it will challenge you to bigger and bigger triangles.

Note that FAI triangle sectors of the same potential triangle are shown on the normal map instrument.